Published by admin on 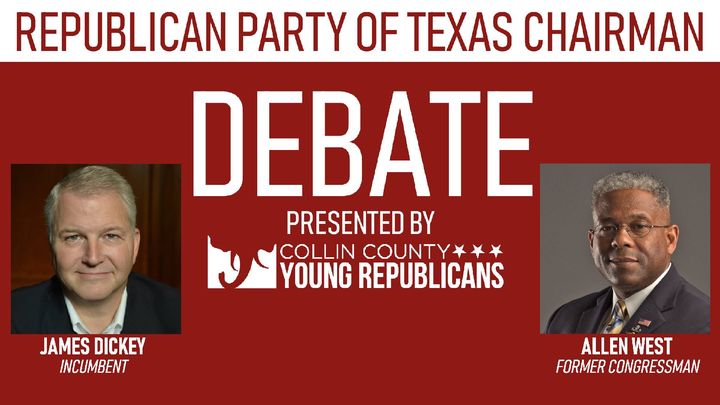 The Collin County Young Republicans host a debate between the Republican Party of Texas chairman candidates: The incumbent chairman, James Dickey, and candidate for chairman, Lt. Col. Allen West.
Attendees must reserve a ticket to the event as space is limited.
Attendees may submit questions they would liked asked to ccyrtx@gmail.com no later than Sunday, February 16 for review by the Collin YR Board.

Chairman Dickey grew up in Ft. Worth where he graduated valedictorian of his high school class. He earned Bachelor’s degrees from Stanford University in Political Science and English. He holds a Master’s in Business Administration from Baylor University. Professionally, he is the co-founder and Chief Operating Officer of IMGA, a small insurance company that works with insurance agents and provides them with the tools they need to do their jobs easily and quickly.

Chairman Dickey has built a reputation for being a conservative leader in one of America’s hardest-to-reach Democrat strongholds as Chairman of the Travis County Republican Party. He has orchestrated several come-from-behind victories as the Party successfully held the line in notoriously liberal Austin.

Lt. Col. West believes it will be principled constitutional conservative policies, not politics, which secures a sound economic future for Americans – with growth, opportunity and returning the promise of the American dream for this generation and those to come.
During his 22-year career in the United States Army, Lieutenant Colonel West served in several combat zones and received many honors including a Bronze Star, three Meritorious Service Medals, three Army Commendation Medals, one with Valor device, and a Valorous Unit Award.

In November of 2010, Allen was honored to continue his oath of service to his country when he was elected to the United States Congress, representing Florida’s 22nd District.
He is a Fox News Contributor, Senior Fellow at the Media Research Center, contributing columnist for Townhall.com, and author of Guardian of the Republic: An American Ronin’s Journey to Family, Faith and Freedom.